What is the difference between Cloud Servers and Dedicated Servers?

Every organization today has two options of either cloud servers or the dedicated servers when they have to take a decision on a hosting platform for their websites.
Cost Associated
Cloud server hosting is more cost- effective and does not require any upfront investment on purchasing and maintenance of infrastructure. Cloud can be configured to give your business the same features of a dedicated server in a shared environment. Cloud is more reliable as it runs on multiple servers and even if one component fails, services continue from the other servers. It is scalable on demand. Cloud is available via internet and allows the users to access the data from any location. Users pay for the services they use.
Dedicated servers not only have huge setup cost but also require an extensive expenditure on maintenance. Organizations that run on tight-budget keep away from dedicated servers because of the enormous upfront expenses associated with its procurement. Further, these servers require devoted administrators and are to be built from scratch, literally. The less-proficient admins might have a nightmare configuring dedicated machines, especially Linux dedicated servers.

Even though windows dedicated server ease things up a bit, it is not as easy to manage as a cloud server, primarily because the latter is provider-managed service. There is literally a thing you would need to do with a cloud server. Though few may argue that managed services also strip some hardware-based controls off you, cloud servers will offer the same service you would get with unmanaged server.
Dedicated servers are physical servers and you have the entire server for your own websites. They are more secure and perform better. You have full control and you have the technical experts available round the clock to monitoring the servers for any glitches.

Cloud servers create multiple instances of data. In case the need arise, data from other bare metal servers can be used to cater client requests, thus ensuring continuous delivery of content to client database. Dedicated servers are island unto themselves - and thus more secure - but have a single point of failure. A single glitch can take the entire system down and subsequently result in complete outage. With dedicated servers, you need to backup database to a backup sever to restore it in case of a disaster.

In cloud servers, backup is created as soon as the original files are changed i.e. changes reflect in real-time. Also, there is no need to separately upload files to a backup server.

Deciding Between Dedicated and Cloud Server

Both dedicated and cloud servers comprise different set of features and facilities. Cloud hosting provides scalability at a vast scale as compared to dedicated server hosting. This is a treat for those users who have customers with demands changing on a daily basis. So basically one can scale up or down easily with cloud hosting and meet the flexibility in their demands. The best part of cloud hosting is the low initial investment as one just need to pay for what they are using and nothing extra. Such flexibility and resilience at such low investment is the real deal. The major difference between cloud and server is that in cloud you will be sharing the computing power while in a dedicated one a single server will be completely dedicated to you.

Which is Better - Cloud Server or Dedicated Server?

While the two have a great deal of difference, it would be inappropriate to identify which one is better and which one is not. However when it comes to value-for-money, cloud server hosting easily outguns its dedicated counterpart. But for some administrators, who yearn for ultimate control no matter what, dedicated servers is the eventual solution.
On the other hand, dedicated servers would be the best choice for those users who have persistent and rarely changes. With these kinds of users, they deliver high performing capabilities and thus maintain a long living mutual association.
Now it's completely up to you which service you chose either cloud server or the dedicated server according to your requirements by analyzing your demands.

Cloud server is a virtual server deployed in a cloud environment. This is done by combining a pool of servers into one and redistributing the resources to individual computers.
Cloud servers work by pooling numerous servers into a giant server. For example, if there are 20 servers in a data center, they are all combined as if they were a single server. Consider this similar to combining several flash drives.
Now since a large amount of computing resource is available, storage spaces can be easily redistributed among people as per their requirements.
Below we have mentioned some scenarios where you should choose cloud servers instead of dedicated servers. 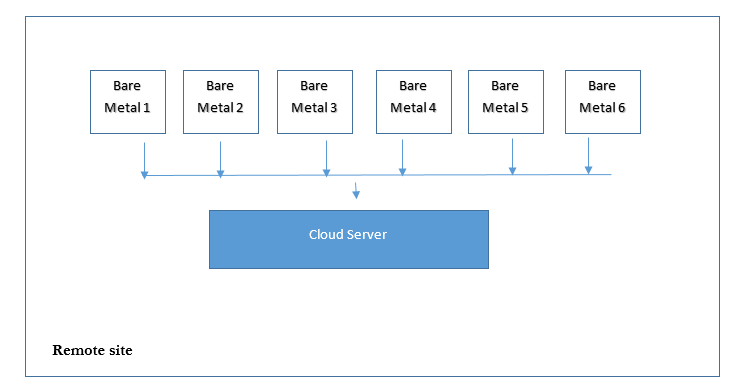 Cloud servers are accessible all over the globe since the service is internet-delivered.
You do not have enough funds at hand to setup a dedicated server or data center on premises.
When you run a dynamic business with fast changing needs. In such cases you would want to leverage the scalability of cloud servers.
If you need top-notch uptime and are concerned about data loss. Cloud providers maintain redundant ecosystem that provider uptime as high as 99.999%.
Cloud services are entirely provider managed so the associated businesses have little trouble while setting up their servers.

CloudOYE is a leading provider of Data Center Services like Cloud Server Hosting & Dedicated Servers Hosting, Get in touch with CloudOYE's team of experts @ sales@cloudoye.com.

Was this answer helpful?

How to Ensure ROI from Cloud Computing

This whitepaper sets out details about various key performance indicators

Tough competition in the online business has alerted CIOs across the globe.

It is a computing paradigm, wherein a huge cluster of systems are interconnected .

By continuing to use and navigate this website, you are agreeing to the use of cookies Find out more.
Scroll